Below you will find the history of how it all started one August day in 2001 from the Driver, Jeff Hothem’s Point of view…

Dellroy, Ohio is a small rural community in the Atwood Lake region of Carroll County.  I have lived and worked on the family owned crop farm all my life.  Growing up on a farm, gave me plenty of access to tractors and machinery and I always made the county fair tractor pulls with my parents and grandparents one of the highlights of summer.   Little did I know at that time, that someday,  I too would be pulling on that track at our county fair pull.

I attended college in Cincinnati, Ohio, and in the fall of 2001 a friend asked if I would be interested in attending a tractor pull at the Clermont  County fair that weekend.  It was then I met Brian Stroud from Midland Ohio. He had been pulling the John Deere 4440 Super Stock diesel tractor called “Never-A-Nuff”, which at one time, had been owned and campaigned by Russ Mears.  I should have known from my first encounter with Brian, who had just pulled and “burnt a piston”, that this toy, no matter how well I took care of it, was going to require a lot of hands on “putting back together” in order to play.

venturing into the world of tractor pulling began the pulling team partnership with my parents.  After a few weeks later, we purchased Brian’s tractor after he patiently showed and explained the “in and outs” of rebuilding the motor after you burn a piston.  On Sept 15, 2001 I had my first pull at the Darke County Fair and placed fifth and drove off the track in one piece! You might say I was “hooked”. That winter I spent many nights and weekends in Andy Battrell’s shop in New Vienna, Ohio learning from his John Deere mechanic experiences how to tear the tractor down and put it back together bolt by bolt!

We spent the next seven seasons campaigning the John Deere 4440 “Loaded Gun” primarily on the OSTPA (Ohio State Tractors Association) Circuit garnishing a Championship, Puller of the Year Award, Family of the Year while finishing in the top third of the class each season.  We spent a lot of time pulling and putting the tractor back together! It had become a family affair.

tractor. So we sold “Loaded  Gun“ to Soren Naerland of Norway and shipped  the JD 4440 across the pond where he continues to campaign the tractor successfully in the Euro Cup and calls the tractor “Loaded Deere”.  With the sale of the old tractor and the plans of building a new component chassis, the team realized that to remain competitive, the team would need to switch to an alcohol motor.  It was then we met Robert Galloway, Owner/Driver of the Hulk Super Stock Tractor.  The 504 cu. in.
OHC motor which is used as the back-up motor to date, was purchased from Robert who resides in Strawberry Plains, TN.  Robert used this motor in the “Hulk” until rule changes prohibited the use of the OHC motor in his class.  With the help of Karlen Motorsports, Gary, Kyle, and his family, who built the component chassis and did the fabrications, Humpco Machine, Bill Humphrey, for the rear end parts and components of the chassis, REI, Phil Shalk, for engine work, GMS, Brent Payne, for establishin 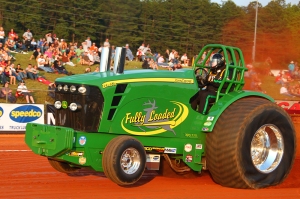 g the fuel system, and Keener Motorsports, Frank Keener, for assisting in making adjustments to the fuel system, “Fully Loaded” made its debut on the OSTPA Circuit at the Madison County Fair in 2010 taking Second Place.  In 2011, “Fully Loaded” won its first National Pull in Lincolnton, North Carolina on the Champions Tour with Lucas Oil Pro Pulling League where we continue to pull to the present date.

In 2012 the team met David Stanfield, the General Manager of the NAPA Auto Parts Carrollton, Ohio Distribution Center.  David and NAPA Auto Parts came onboard as a sponsor for the Fully Loaded Pulling Team and purchased Graphic designed Team T-Shirts, and continues to do so each year.  In 2013, NAPA purchased a 620 cui short block built by REI as a replacement motor to increase the power from the original 504 cui motor.   For the 2015 Pulling Season, Fully Loaded was given a new billet aluminum head and a brand new complete MSD Ignition System purchased by NAPA.  For the 2016 season, NAPA Auto Parts will continue to supply the team with t-shirts for fans along with other merchandise to be given away.  David and the NAPA Auto Parts Carrollton, Ohio Distribution Center has agreed to assist in paying for part of the team’s fuel usage to and from the pulling venues along with the supply of awesome NAPA Auto Parts and products!

In 2014, the team had the pleasure of being introduced to Chris Casey who is a Category Manager at Balkamp. We began talking and discussing our teams involvement with NAPA Auto Parts, and then the possibility of sponsorship through Carlyle Tools. We finished off the 2014 season with running Carlyle Tools decals on the sides of our tractor, and we also were given tools for our team to use and then return to them feedback on suggested improvements and/or pro’s or con’s.  These tools have been, hands down, the best tools we have come into contact with!

During the winter of 2014-2015, we had our meeting with Carlyle Tools at which time it was agreed upon and decided that Carlyle Tools was going to wrap the tractor! And they did just that… Carlyle Tools wrapped our tractor, bought us new crew shirts from Six B Apparel, and a new driver’s suit decked out in NAPA and Carlyle Tools logos.  Carlyle Tools was again on board with our team for the 2016 season, by assisting us in our tool needs and some monetary expenses along with advertising and promotional items to give away to fans in the pit area.

During the 2015 National Tractor Pulling Championship in Bowling Green, Ohio Barbara had the opportunity to meet Bill Mcknight, who has since retired, from Mahle Motor Sports. Barbara was able to secure the help of Mahle Motorsports/Clevite Bearings as a sponsor of the Team!  With the supply of bearings for the tractor and some monetary assistance, we became partners with Mahle Motorsports!

In early 2016, the team met with Andy and Kraig Brechbuhler, of Brechbuhler Scales and B-Tek Scales. Brechubuhler/B-Tek Scales are a leading scale manufacturer and scale servicing company with scales all over the Unites States and the National Headquarters is located in Canton Ohio.   Andy and Kraig wanted to be apart of the team and have been on board assisting us greatly in making improvements to the tractor and helping defray team expenses and continue their support through present date.

Then in the fall of 2016, more exciting news started to develop for the Team. B’laster Products, the makers of the well know PB B’laster penetrating spray from Valley View, Ohio, expressed interest in joining the Fully Loaded Team!  A total team transformation took place and the Fully Loaded tractor was wrapped along with the support vehicle and flags, table clothes, and driver suit with the B’laster logos and color scheme were obtained!

In 2017, the team met with Joe Coram of Canton Towing, which is located in Canton, Ohio.  Knowing Joe for quite some time prior to our teams approach to his company about sponsorship, helped, as now Canton Towing came on board as a sponsor of the Fully Loaded Team!  Canton Towing is a leader in the Towing, Recovery, and Logistics Transporting world.  With up-to-date training of their operators, quality and reliable equipment and excellent customer service, Canton Towing is second to none in the industry!

New for the 2019 season, Leppo Rents based in Talmadge, Ohio with branches located in many areas of northeast Ohio, has now become a sposnor of the Fully Loaded Team.  Leppo Rents,  offers sales, rental, service, and training and is a Bobact Dealer.  For all of your Rental, Sales and servicing needs of your equipment, check out Leppo Rents of northeast Ohio!