The team has participated in two great events over the past couple of weeks and has done well in the points race, trying to recover from the terrible last place finish of the start of the season in Saluda, SC. 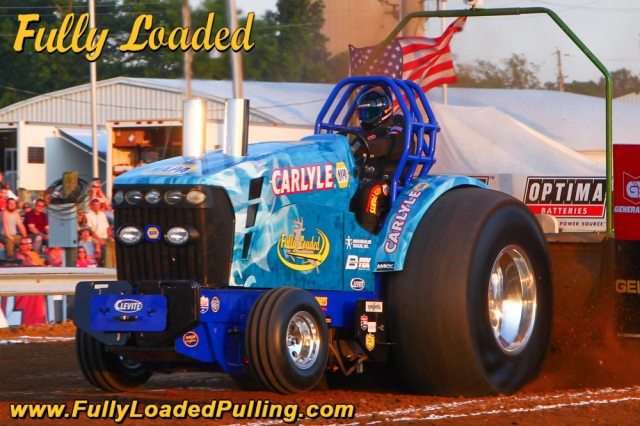 First we start off in Wilmington OH June, 11th, 2016. The night before, the fairgrounds received a ton of rain which meant a lot of track preparation needed to take place for the Saturday night show. The fair board and track crew did their best, but the track was a tricky one. The starting line area did not have much to get hooked up on with our Firestone Puller 2000 tires and the driver did not get into the throttle quick enough. We ended up with a fifth place finish that evening. This left the team in fourth place in the end of season points race, trailing the three way tie for first place by two points!
The next weekend we traveled to Greenville OH, The Ohio State Benefit Pull for the Juvenile Diabetes Research Foundation. The first night went extremely well for our team as we were the test hook and laid down a beautiful pass which allowed our team to take the win for the Friday night session! This shook up the end of season points standings and now Fully Loaded and Taking Care of Business were tied for first place!

Session two in Greenville Ohio went well as the Fully Loaded Team was able to acquire a third place finish after having the belt that runs the ignition system come off of the pulley and shut the motor down right at the end of the run. We missed first place for that session by approximately 3.5 feet! However after Saturday’s session in Greenville, OH we were able to move up to the number one position in the Lucas Oil Champions Tour end of seasons points race!
We are very excited and looking forward to seeing what this weekend event has in store…can we keep the first place position? Can we keep our string of good runs going? Stay tuned! It definitely will be a battle on the track between drivers and tractors as Taking Care of Business is 2 points behind and Out of Time is only 10 points behind! Check out below, the end of seasons points race for the entire MavTV Unlimited Alcohol Super Stock Class. 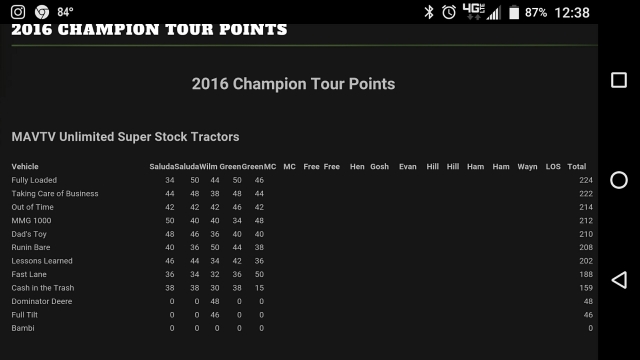 Good luck to all of the competitors for this weekend’s event at Rumble by the Refuge in Mound City, Missouri! Stay tuned for more exciting news and videos!