Wow! What a great job by the Barga Family of Ansonia, Ohio! This family worked like crazy to put on a two day Lucas Oil Champions Tour Event at the York Woods, Greenville, Ohio facility! This event was the 10th annual Ohio State Benefit Pull benefitting Juvenile Diabetes Research Foundation. All proceeds and profits from the pull were donated by the Barga Family to JDRF of Southwest Ohio!

From meals both nights for pullers and families served by the Barga’s, to excellent hospitality and fun…this for sure was going to be a great pull AND for a great cause!

The two day event, Friday night and Saturday we’re sure going to be tough, not only for us, but fellow competitors as well because for most of the pullers in our class it was their first time out for the season.

Friday night our class was the first up, and we were lucky enough to have been drawn as first hook. The pressure was on! 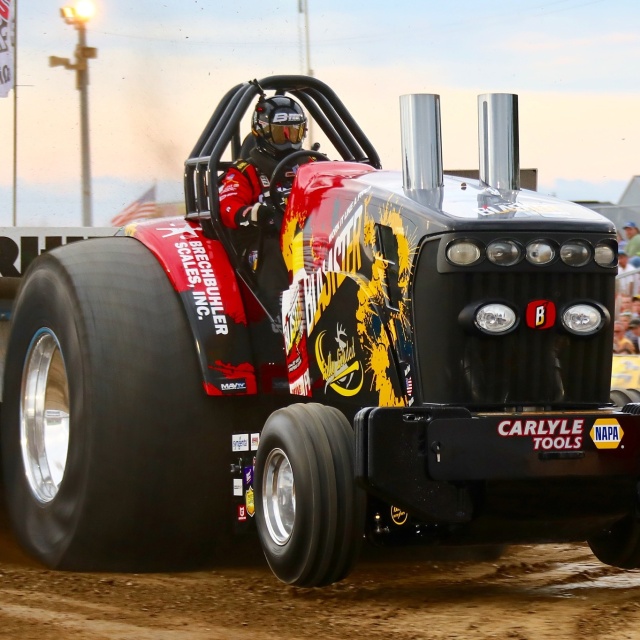 So after careful consideration of possible sled location on the track, we chose to take the far left side of the track just about four feet of the left side line. And it worked! With a distance of 306 foot we came home with our very first win of the 2017 season with Lucas Oil Pro Pulling League Champions Tour!

We were presented this awesome trophy for our accomplishment of first place and had a great time interviewing with Leslie Mears and the rest of the Lucas Oil Production Studios staff!

(All classes at the Ohio State Benefit Pull, both nights, will be aired on National Television later this summer on MavTV and other networks.)

Saturday, the team made some more changes to the fuel system and had a very nice pull as well! With a distance of 330 feet we ended up third place! Another podium finish! Second place was 334 feet and first place was 336 feet. We were definitely in the hunt!!! Congratulations to Jeff Hirt and the Running Bare Tractor on getting the first place finish and also to Neil Getting with the Lessons Learned Tractor on his second place finish!

The team is off to a great start this year and we look forward to seeing what the rest of the summer has in store for us!

Thanks again to the Barga Family for putting on such a great event and for donating the proceeds to JDRF!

Next pull will be in one week at the NTPA Grand National Event in Tomah, Wisconsin!